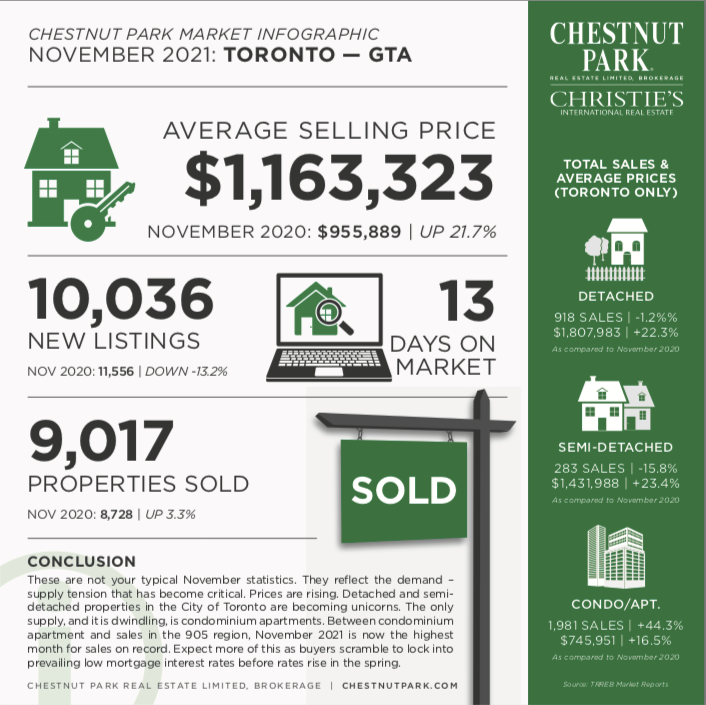 With one month still remaining in 2021, November’s reported sales brought the total year-to-date sales to 115,716 residential properties sold. We will finish the year with approximately 122,000 sales, eclipsing the previous annual record for properties sold in 2016. In that year 113,040 properties traded hands. As will become evident, given the supply problems the market is experiencing, 2021’s record-breaking accomplishment is not likely to be surpassed for some time, and definitely not in 2022.

In November 9,017 residential properties were reported sold, also a record number for any previous November. Last year 8,728 properties were sold, 3.3 percent fewer than this November. The big news coming out of the November data, aside from the new records achieved, was what’s happening to prices and the region’s disappearing inventory.

The supply problem became even worse in November. Only 10,036 new listings came to market in November, 13.2 percent fewer than the 11,556 that came to market last year. Given the absorption rate – 9,017 properties were reported sold, almost the same number as came to market – combined with the few listings that realtors were able to bring to the market, we find ourselves entering December with only 6,086 properties available to buyers, an eye-popping 56 percent fewer listings (13,798) than at the same time last year.